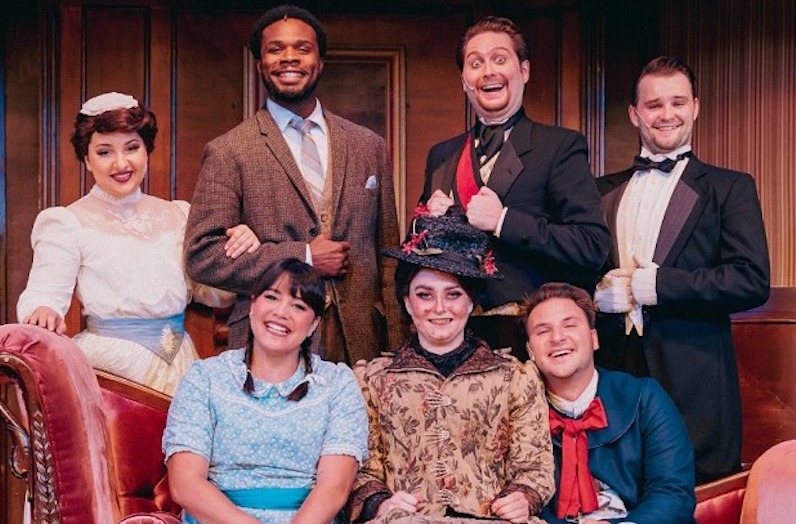 Scary Poppins, followed by The Villains Vaudeville Review, is onstage through November 12 at The Great American Melodrama in Oceano.

So . . . prepare to get your Halloween haunt on now. There’s no bad news when it comes to The Great American Melodrama’s latest iteration of its infamously popular show, Scary Poppins, running through November 12 at the company’s theatre in Oceano. That descriptor applies as well to The Villains Vaudeville Review that follows the two-act melodrama, bringing the evening to a close after three high-grade, hauntingly hilarious hours. 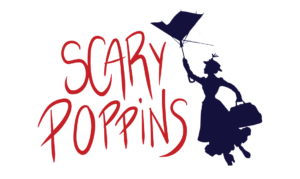 The good news is that if you haven’t seen the show before, you have time to make it a tradition starting now. Scary Poppins is the Melodrama’s most requested show (this time marks its fourth appearance). Director Katie Worley Beck has assembled probably the funniest batch ever of top-notch multi-talented actors who, under her able direction, milk almost every scene and situation for the most laughs and (in true Melodrama style) groans of grudging appreciation as well as bold boos aimed at the villains.

And villains there are aplenty. Top of the list is Baron Dimitri Nogoodnik (the marvelous Toby Tropper, a local theatre veteran) who with the help of the butler Jeeves (the marvelous Melodrama newcomer Michael Wells, here playing the first of two roles) is attempting to steal Professor Peabody’s latest invention. At the same time the absent-minded inventor (the marvelous Antwon Mason, a Melodrama veteran that we need to see more often), who devises devices like a cell phone with a 5,000-foot extension cord, is looking to hire a new nanny for his two—let’s just say, pretty annoying—children (Jesse Graham, making his Melodrama debut as the crumpet-loving Jack, and Sydni Abenido, a local favorite, who as Jill pines to be a female aviator; and yes, both are marvelous).

You might think that the role of Scary Poppins, here played with marvelous gusto and a mighty voice by Meggie Siegrist (who puts the cackle of the Wicked Witch of the West to shame), would be villainous, too. But with her artfully-arranged arrival (in true Mary Poppins style, albeit ending up with an off-stage crash into a tree), and her ability to provide amusing entertainment for her charges (well, sewers and rats can be fun, too), she proves up to the task of saving the good guys (“awww . . . “) from the bad guys (“boo, hiss”).

Helping her save the day are the household’s maid, Prudence (the marvelous Natalie Mara, making her debut on the Melodrama stage) and Dirt (the second of the dual roles here played marvelously by Wells). All of this is accomplished with musical take-offs on familiar tunes, and almost every production number is a campy, wink-at-the-audience frolic, with one or two cartwheels excellently executed among all the very entertaining singing and dancing.

Beck, choreographer Eric Hoit, and musical director Helen Gregory are all-in on making this show, written by Ben E. Millet and adapted with additional material (apologies to Lompoc and Bakersfield, among others) by Hoit and former Melodrama musical director Jordan Richardson, a crowd-pleaser.

But wait, there’s more! More villains, that is. The Villains Vaudeville Review following the second intermission is a hoot unto itself, wherein our seven players enliven the already lively evening with caricatures of famous bad guys. A devilish Lucy (all in red, get it?) tries to take an innocent Snow White to the other side and teach her how to be a world class villain (“There’s a little bit of bad in everyone . . . and isn’t that good?”) with help from (among others) Beetlejuice, Captain Hook, the Joker, Catwoman, and the Riddler.

Written and directed by the talented Mike Fiore, with musical arrangement and direction by Helen Gregory and choreography by Danya Nunley and Rachel Tietz, this clever and original vaudeville review makes its way through playful parodies of pop songs, ending on a very high note with “No Bad News,” which is where we came in.

If the Melodrama’s new artistic director Darrin Murrell checks the box office for Scary Poppins and The Villains Vaudeville Review this year, we may well expect this pairing to usher in the Melodrama’s annual year-end Holiday Extravaganza next year, and for many years to come.