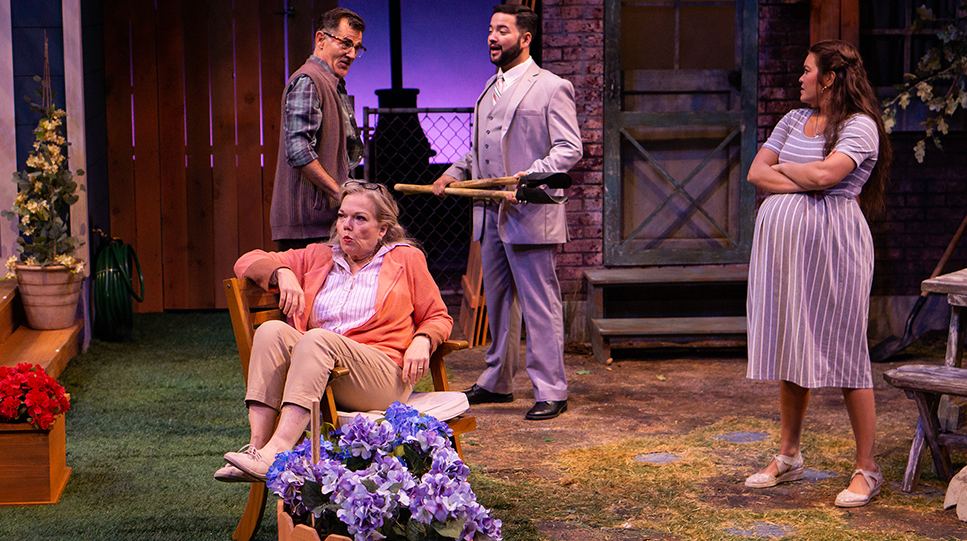 So . . . there’s much more going on than two couples arguing over a shared fence in PCPA’s production of Native Gardens, a play written by Karen Zacarias in 2016 that feels, in 2022, already a bit behind in the context of today’s discussions surrounding the “isms” of race, sex, class, and age. That’s not to say that PCPA’s current take on the play isn’t an excellent presentation in terms of acting, staging, and directing—indeed, it’s a treat to see familiar names on the playbill doing outstanding work, contributing to PCPA’s already sterling reputation in those areas.

Catalina Maynard’s name isn’t new to PCPA—she’s acted in some past summer productions—but this is her first time in the director’s chair for this company. Her practiced hand is clearly evident in the delicate interactions between one couple, the Del Valles (resident artists Christen Celaya and Oscar Emmanuel Fabela), and another, the Butleys (Kitty Balay and Andrew Philpot, also resident artists), as they get to know each other over the backyard fence that separates them. Of course (this is theatre, after all) the fence isn’t the only thing that separates them, and the ensuing discussions about shared interests and disparate boundaries become louder and more heated the more the couples get to know each other.

The dialogue between the characters, while at first conversational and accepting, grows more fraught as perceptions and misconceptions come to light. Each of the four neighbors harbors his or her own concept of reality (and illusion), and the literate direction encourages audience members to explore their own understanding of the differences articulated by the characters.

The interplay between the couples seems designed to provoke audience response, with players voicing strident opinions, then seeming to reconcile with each other, only to again experience discord that threatens to undermine any agreement it seems they have reached.

Pro and con, back and forth, none of the characters really seems to embrace harmony, because discord is needed to drive discussion, and the play’s resolution is reached without anyone onstage ultimately, really, understanding anyone else. The fault lies in the play as written, with the extremely likable actors giving it their best. It doesn’t help that the playwright begins and ends the play with the characters speaking to the audience rather than to each other. The play is described as a comedy “of good intentions and bad manners,” and some of it is indeed funny, but the humor comes from these adept actors who know how to give a good line reading.

If you want to explore a dialogue “on topics like privilege, race, influence, power, perceptions, where we choose to live, and how we define and claim space”—as Maynard writes in her director’s note—then this production is for you.

And Jason Bolen’s set, which in addition to the aforementioned fence features the backside of two architecturally diverse houses and one huge wonderfully-rendered oak tree, is masterful. The lighting by Cody Soper and the sound by Elizabeth Weidner serve the production well, with the musical interludes between scenes well-chosen and a pleasing enhancement to the action.